Shop 0 items - $0.00
How solar and batteries helped save a home, and its people, from a fire storm | Off Grid Solar System Specialists - Solar Heroes 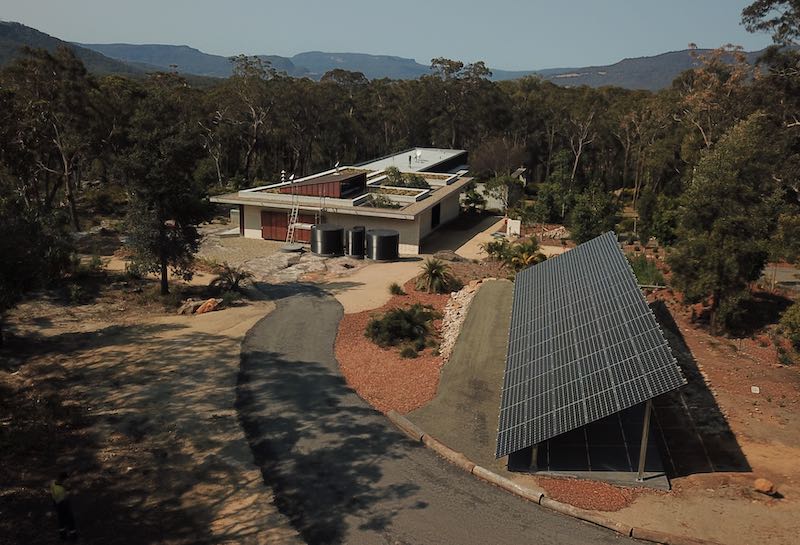 The story of how a solar and battery storage system went off-grid and into battle to help save a house from the devastating bushfires that ravaged Kangaroo Valley in New South Wales in January is the subject of a new television documentary series airing this weekend.

The stunning Kangaroo Valley property, and its brush with disaster over Australia’s horrific Black Summer, was first featured on Network 10’s Australia By Design: Architecture in series four of the program, which kicked off in July this year.

But the house, designed and lived in by Sydney-based architect Nick Turner, will appear again in a new spin-off of the series called Australia By Design: Heroes, which explores how the design of the NSW home – and particularly of its solar and battery storage system – helped spare it from catastrophe.

“What we survived was a cyclonic firestorm,” says Turner in a promo for the new series, which shows some truly terrifying footage of the scene that summer. “And they came the following morning saying they were here to find nine people dead.”

As the show explains, in the opening days of 2020, when a wind change pushed a fire burning south of the Southern Highlands towards Kangaroo Valley, Turner and eight of his neighbours decided to stay and defend the property.

“We saved the house and the house saved us, and that was a nexus that, if it had broken at any point, would have meant that we would have perished,” Turner said in an ABC interview not long after the event.

And a major part of what saved the house, which despite its remote location is grid connected, was its sizeable and carefully designed solar and storage system.

As Roland Lawrence explains in the upcoming show, the system was designed to offer the property 22.5kW of back-up power, and 50kWh of storage capacity, all of which became crucial when the power supply to the Kangaroo Valley was cut as the fire loomed.

“As the fire front approached, the property lost power at around 6pm. The full front hit at around midnight,” Lawrence told One Step.

But the solar and storage system meant there was enough power supply to keep running a carefully designed “halo” watering system, that saturated everything around the house and protected it from the storm of embers that swirled around it.

Lawrence says he was awake and communicating with Turner in the wee hours of the morning, monitoring the solar and battery system remotely and doing everything in his power, from far away Sydney, to make sure it did its job.

Somehow – and watching the footage (stills from the vision pictured above), it seems miraculous – the house and all its occupants survived. As did the power system.

The solar and batteries were also vitally important in the fire’s aftermath, adds Lawrence, providing enough power to keep the house running comfortably off-grid with the surrounding network destroyed.

To hear the story from its key players, you can watch Australia By Design: Heroes on Sunday on Network 10 at 2.30pm.