Sea level rise estimates are going to need to be revised upward: A portion of the West Antarctic Ice Sheet that is home to some of the fastest-flowing glaciers on the continent appears to have entered a state of retreat and melt that is “unstoppable,” two new studies have found. “It has passed the point of no return,” said Eric Rignot, lead author on one of the studies and a glaciologist at the University of California, Irvine, and NASA’s Jet Propulsion Laboratory.

The West Antarctic Ice Sheet has been of concern to climate scientists because it contains enough ice to add 10 to 13 feet toglobal sea level rise were it all to melt. (Because the ice sheet’s ice is bound to land, it increases the volume of the ocean as it flows into it, like ice cubes added to a glass of water; sea ice, on the other hand, doesn’t change the ocean’s volume as it melts because it is already displacing that volume, just as a melting ice cube doesn’t add volume to the glass.)

Over the past couple of decades, scientists have particularly been scrutinizing the six glaciers of the Amundsen Sea Embayment, including the Pine Island Glacier and Thwaites Glaciers, two large, fast-moving glaciers that are linchpins in the larger ice sheet setup. The entire embayment drains one third of the West Antarctic Ice Sheet.

One of the main points of concern is what is called a glacier’s grounding line: the point where the land-bound ice meets the ocean and begins floating atop the water. Warm water flowing underneath this floating ice shelf can melt and thin the shelf from below, pushing back the grounding line.

“This circulation of ocean water beneath the ice continuously removes ice,” Rignot said. (The warm water is thought to be moving into the area because of changes in regional winds wrought by climate change.)

Because the valleys in which the glaciers flow become deeper farther inland, the glacier becomes thicker as the grounding line retreats. This increasing thickness propels the ice along — the glacier “flows faster, and away it goes,” said Sridhar Anandakrishnan, a Penn State geologist who has studied the area extensively. 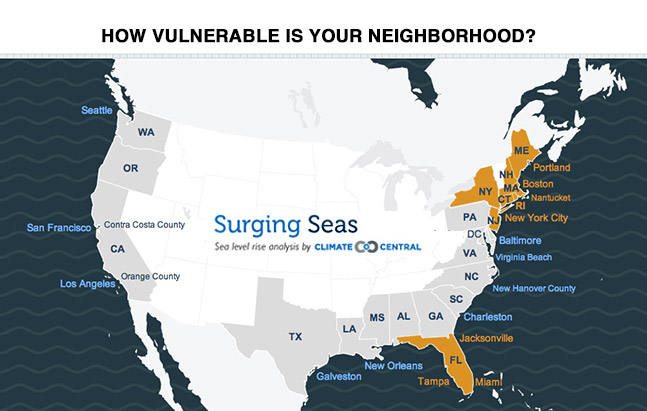 Click on the image above to check for threats from sea level rise and storm surge.

Rignot’s study, accepted for publication in the journal Geophysical Research Letters, looked at observations of the glacier’s grounding lines since 1992 and found that they have “been retreating at record speeds, unmatched anywhere else in the Antarctic,” Rignot said during a press conference.

A previous study by Rignot and his colleagues also found that the flow speeds of the glaciers in the ASE have also increased over the past few decades, with a minor recent slowdown in the Pine Island Glacier’s flow, increasing the total amount of ice discharged into the ocean. The faster glaciers flow, the more they spread and thin. The faster flow and increasing retreat reinforce each other in a feedback cycle.

Radar measurements of the bedrock below the glaciers don’t find any hills or other impediments that could temporarily slow the retreat of the ice.

“The retreat of ice in that sector is unstoppable,” Rignot said.

The other new study, detailed in the May 16 issue of the journal Science, used the radar observations of the bedrock topography and measurements of the ice flow speeds to see how quickly the Twaites Glacier might disappear. Using varying rates of melt that correspond to possible future levels of warming, they found that the glacier reached the point of rapid collapse in 200 to 1,000 years. Once that point of rapid collapse is reached, the remaining ice could disappear within a matter of decades.

“All of our simulations show it will retreat at less than a millimeter of sea level rise per year for a couple of hundred years, and then, boom, it just starts to really go,” study author Ian Joughin, a University of Washington glaciologist, said in a statement. The collapse of the ASE alone could contribute about 4 feet of sea level rise, and its demise would leave more inland portions of the ice sheet vulnerable to melt and collapse.

The world’s oceans have risen by an average of 7.5 inches since the beginning of the 20th century, and the impacts of that extra water are already being felt. Low-lying islands are seeing their land area reduced, and flooding during storms like Hurricane Sandy and Typhoon Haiyan have been exacerbated. Further sea level rise could see some islands and coastal areas — home to an increasing share of the world’s population — disappear beneath the waves and would make storm-prone areas more dangerous to live in.

While the contribution of the Antarctic ice sheets to sea level rise has so far been much smaller than other factors, like the thermal expansion of the oceans as they heat up, “it’s becoming pretty clear that the major ice sheets of this planet will have a larger and larger role” in sea level rise, Anandakrishnan said.