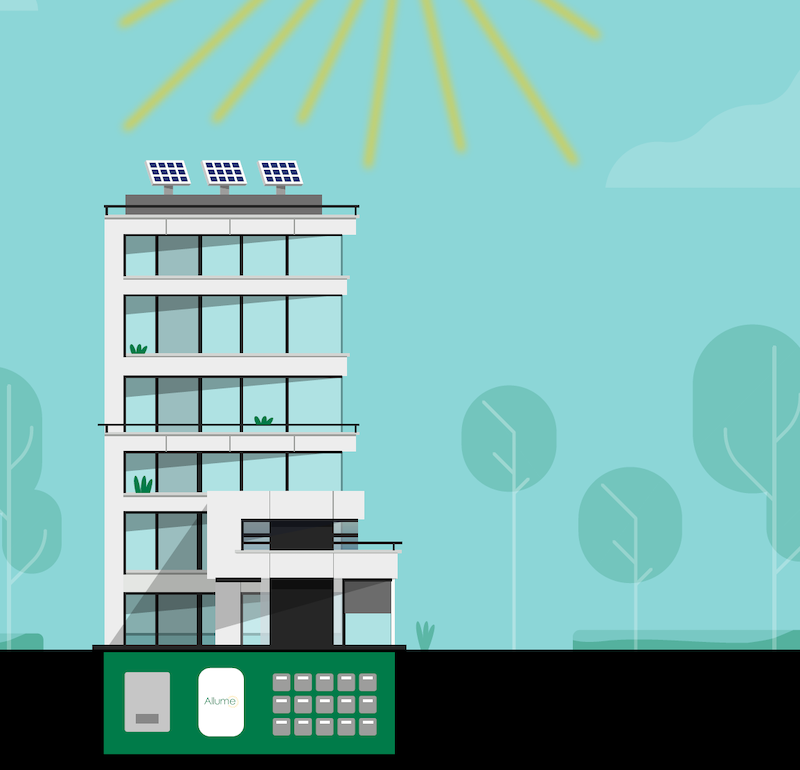 A partnership between Allume Energy and listed up-and-coming electricity provider Locality Planning Energy has borne its first fruit, with a series of shared solar systems “live and operational” on Queensland strata properties and in one case effectively taking an entire apartment building off-grid

LPE, which specialises in selling electricity to “strata communities” – at this stage in Queensland and New South Wales – joined forces with Victoria-based Allume in May of 2020, to provide its customers with access to solar.

Allume is the developer of the solar ceiling-smashing SolShare technology, which works within an apartment block or shared commercial building’s existing metering infrastructure, or “behind the meter,” to allow solar to be distributed and billed to individual apartments.

As One Step reported last year, the deal with LPE was to see it supply and maintain the Allume-engineering shared solar system at no capital cost to body corporates or residents, offering “much less costly” electricity for residents than that sourced entirely from the grid.

Each system would be designed to generate enough solar to support a strata community’s daytime electricity needs, and distributed in real-time across all residents within the complex, thereby maximising on-site solar usage and savings for residents.

A year after the announcement of the collaboration, LPE said it had successfully completed the installation and commissioning of four “Shared Solar” systems on the Energex network, with one building offsetting 100% of its grid energy requirements.

As LPE explains it, the technology manages the distribution of solar generation between building residents without the requirement to first send that energy back into the grid and repurchase the energy back from the grid.

“In effect, the ability to distribute solar behind the meter without entering the grid, dramatically cuts the network charges to the customer resulting in a cheaper overall electricity price.”

LPE says that the Shared Solar product could boost the saving already offered by its best grid connected rate from 15% less than the reference price to between 20-22% cheaper, while also offering an increase in margin to LPE of over 20%.

The company – which pin-pointed “solar for strata” as a substantial addressable market in a 2020 investor presentation – said the new product had given it access to an entirely new category of potential customers, and was expected to be a key long-term growth driver.

“We have listened to our customer base and have solved one of their major problems which is equitable access to affordable renewable electricity for apartment living,” said LPE CEO Damian Glanville.

“With the first installations now complete, customer feedback has been overwhelmingly positive and from an ESG perspective we believe this product further differentiates LPE from competitors, as we deliver on our goal to create sustainable communities of the future.”