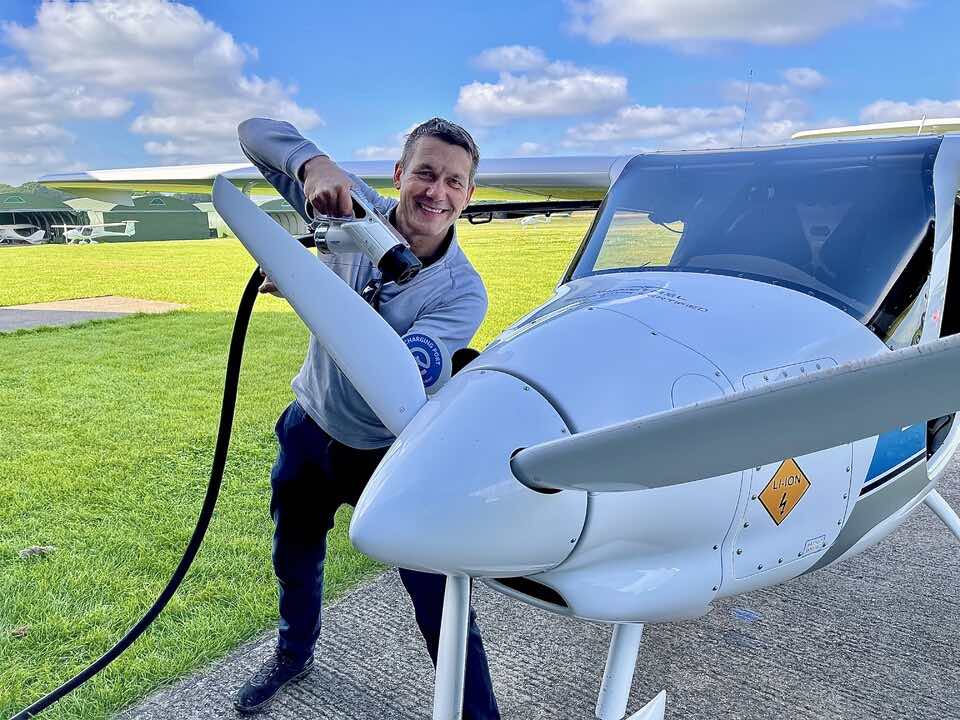 There are a few moments for every pilot that stand out above the rest, and I have just had one … my first electric-powered flight.

Having ordered 200 electric EVE aircraft from Embraer, our OneSky group is now on a timeline to get ready for electric passenger operations.

To find out how different flying electric aircraft will be, I grabbed the opportunity to fly Europe’s first certified electric aircraft, the Pipistrel Velis Electro. My thanks to the team at Neboair and especially to Deepak Mahajan, for taking me on this flight into the future of aviation!

Let me start by answering the question that you are probably thinking right now – what is the endurance of this electric aircraft? The answer is an hour but with a required reserve of 10 minutes (that reduces any planned flight to 50 mins).

Most pilots are cautious, especially with new aircraft, so practically this first electric aircraft is limited to 45 mins. With an average ground speed of 100 mph, a 45 min flight connects Malta to Sicily or Martha’s Vineyard to Boston.

Even at this short range, it is evident that the dawn of electric flying is now happening … and with every newly certified aircraft that follows the Electro, the range and payload will improve.

The next question might be “was it quiet?” No, not quiet but significantly less noisy than any other aircraft that I have flown before.

Most of the Electra’s 60dB (a motor bike is 95dB ) comes from the propellor which is similar in shape and size to other light aircraft. But there was far less vibration than a combustion engine produces, so the ride was super smooth.

The biggest difference (and this is a game changer) for the pilot of an electric aircraft is the simplicity. With just four switches to take you from start up to take off, the pre-departure check list was a delight.

For personal and family flying I have a Cessna 210. When I fly the 210, it’s a constant task to monitor each of the six cylinders individually for their temperatures and pressures.

Not paying attention to the detail of running a piston aircraft can result in an expensive repair bill or much worse, an engine failure. Jet engines are easier to manage than pistons, but the maintenance bills are drastically higher!

Flying an electric aircraft takes away the pilot’s engine management headaches; set a power (measured in kilowatts) and the motor responds instantly and stays there until you move the throttle again.

No more complicated calculations for altitude & temperature changes – a motor will give you the same output regardless of these environmental differences.

Electric car drivers now enjoy journeys that cost a quarter of using a diesel or petrol vehicles. They have longer term savings also with far less maintenance being required due to having just a small number of moving parts.

Electric aviation is going to be the same, in fact the cost of charging I would describe as being insignificant. A full charge (21 kW h) of the Electro at the average UK price of 15p per kW, comes out at less than £5 / $7 per hour of flying.

The Wright Brothers flew in a piston aircraft in 1903, Frank Whittle & Hans von Ohain simultaneously developed the turbo jet engine in 1940/1, and Ivo Boscarol first certified an electric aircraft in 2020 … I am thrilled to now claim my own electric first and feel excited about the next decade, as sustainable aviation is finally set to come of age.