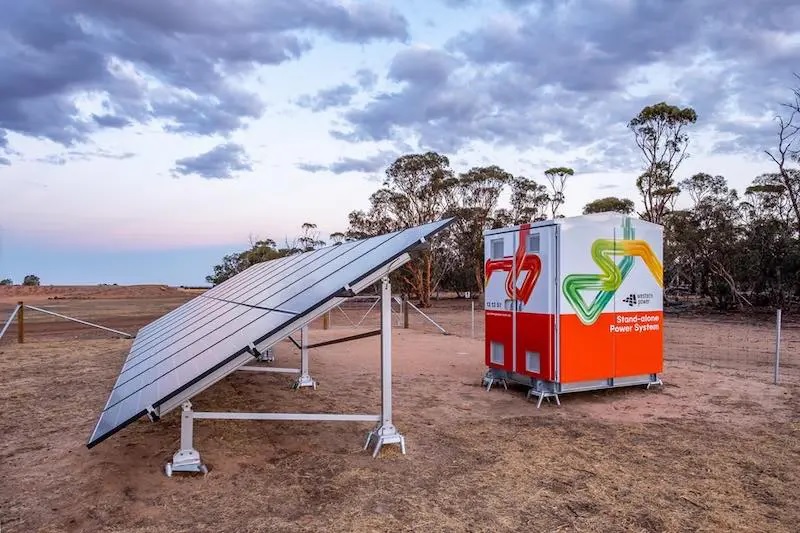 Stand-alone power systems that bypass the grid to supply mostly renewable energy to individuals or communities have been cleared for wide-spread installation on the National Electricity Market under new rules published by the Australian Energy Market Commission (AEMC) on Thursday.

The AEMC said the rule change meant electricity distribution companies could establish SAPS – usually comprising solar and battery storage, with a back up diesel generator – on parts of the network where it proved cheaper, safer and more reliable than traditional poles and wires.

This is something that Western Australia, whose grid is separate to the NEM, has been trialling with great success for some years now, including in 2016, when Horizon Power installed solar and battery-based SAPS for customers affected by the 2015 Esperance bushfires, which destroyed more than 320 power poles and hundreds of kilometres of power lines in the region.

Since then, Horizon has committed to deliver more than 1,000 standalone power systems across the regions and in remote Aboriginal communities as part of a broader $75 million Renew the Regions initiative – itself a part of the WA state government’s Recovery Plan.

For rest of the NEM, however, SAPS have not been officially “counted” as a part of the networks, or covered by consistent reliability standards or customer protections – until now.

“We now have agreement on a staged implementation, beginning August this year,” said AEMC chair Anna Collyer on Thursday, after the rules were gazetted in the South Australian parliament and then published by the market rule maker.

“This allows electricity distributors to establish SAPS in communities where stand-alone power may be cheaper, safer and more reliable than grid supply, in jurisdictions that have opted into the new framework,” Collyer said.

“Particularly in remote, bushfire-prone areas, SAPS do away with the need to replace damaged grid connections at significant expense.

“In fact, the power infrastructure that connects communities to the grid can also cause bushfires, which is another reason SAPS are attractive alternatives to traditional network connections in those areas.”

Collyer said electricity distributors were predicting that SAPS solutions might cater for several thousand customers in the next decade and could expand even faster as grid connections reached the end of their service lives.

Certainly, this seems to be where Western Australia is headed – Western Power in 2019 described SAPS as “the front-runner technology” to underpin power reliability in the state’s remote and regional areas.

Three years into its own SAPS trial, Western Power found using stand-alone solar and storage on certain parts of its grid had delivered some significant wins, including the avoidance of 71 hours of outages a year and, of course, the decarbonisation of electricity supplies.

Horizon Power’s latest 45 standalone power systems, meanwhile, will lead to the removal of 120km worth of poles and wires from private paddocks, an added benefit that has proven attractive to farmers.

“This is a timely rule change as we continue to transition to a renewable energy future. It increases the reliability and resilience of energy supply in remote areas, as well as reducing network costs for all customers,” said Collyer.

“Maintaining and replacing traditional older power lines and related infrastructure is a major cost in a country the size of Australia.”

The rule changes apply to new distributor-led SAPS. Existing microgrids and other independent power systems will continue to be managed under state and territory legislation.

“The changes operate on an opt-in basis, as some states may need to make amendments to their own legislation to accommodate SAPS,” Collyer said.

The process to change the rules around SAPS began several years ago, Collyer noted, and involved an extensive AEMC review, completed in 2020. The review’s findings were supported by the NEM jurisdictions and led to changes in 2021 to the national electricity and retail energy laws.