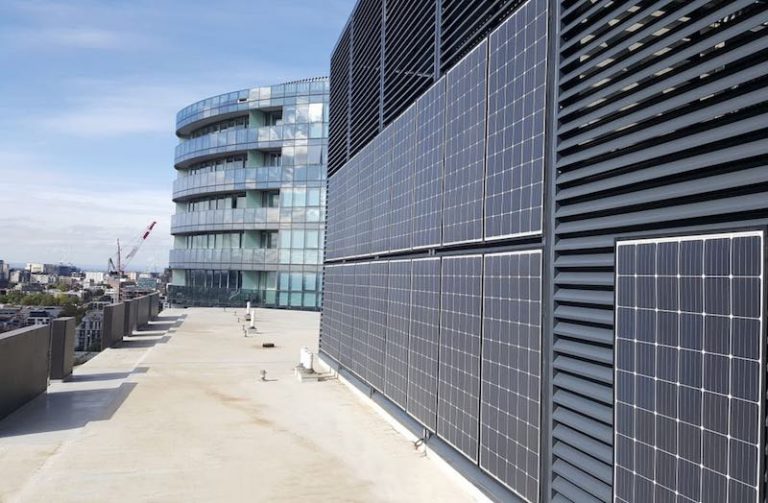 An 87-panel vertical solar array has been installed at a residential apartment building in Melbourne, to get around the dual problems of unsuitable roof space and high power bills.

The unusual system – one of few in Australia – was installed on the Harbour One building in the inner city Docklands precinct by Melbourne-based embedded network specialist Winconnect last month.

The total capacity of the vertical array is not specified – One Step has reached out for more information – but Winconnect has said it will generate around 32,000kWh a year, the equivalent of powering 11 apartments off-the-grid over that period, and save the building’s owners’ corporation $6000 a year on energy costs.

This could suggest that the panels – which Ashdown also noted were a little bit more expensive than traditional modules – could be from the range of eArche solar modules from Zhengrong Shi’s Sunman venture.

Accredited by the CEC early this year, the panels were officially launched in Australia in August of last year with a 253kW installation on the Sydney Maritime Museum, but they also power the Byron Bay Railroad Company’s solar train.

As RenewEconomy has reported, the eArche modules avoid the need for encasing the solar cells in glass and aluminium structures by using composite materials, thus achieving a module that is 70 per cent lighter, and 80 per cent thinner than traditional modules.

The idea was that these thinner, lighter and more flexible panels would allow for them to be integrated into building materials and deployed onto structures with weight limitations.

For the Harbour One building, the issue seems to have been that there just wasn’t the space available on the roof for a decent sized solar array.

“When we sat down with the Harbour One owners’ corporation, solar was at the top of their mind,” said Winconnect CEO Phil Baxter in comments to Facility Management magazine.

“We noticed that while the flat rooftop surface itself was not available, there was still a lot of vertical surface area at the top of the building with exposure to direct sunlight.”

Winconnect, which also claims to have installed Melbourne’s “tallest solar array” on the Eq building, set about working with a supplier and installer to source lightweight panels that could be glued to the vertical surface on the building’s rooftop.

“The …way [the panels] generate electricity is the same but the difference is they’re a third of the weight, they’re flexible and they are a little bit more inefficient,” said Ashdown, in comments to Domain this week.

“What this signifies is with a little bit of creative thinking and utilising the technology of today and tomorrow, there can be a benefit of solar photovoltaic cells on a building but with just a different design mechanism,” he said.

Winconnect claims the vertical array is a first for Australia, but we note that the so-called “Welcome to the Jungle” house in Darlington, Sydney, has a CEC award-winning solar wall made up of a custom order WINAICO WSP-300 with a black backsheet connected to SolarEdge optimisers and mounted to Schletter rail.

And on Australian territory in Antarctica, a 105-panel, 30kW vertical solar farm was switched on at the Casey research station in March of last year, to provide around 10 per cent of the facility’s annual demand, and slash its use of diesel fuel.